W&W2021 - Baume & Mercier THE RIVIERA COLLECTION IS BACK

AN ICON MAKES A RETURN

The Riviera watch, a legacy of Baume & Mercier design

Created in 1973, the Riviera watch returns this year to revive the spirit of a distinguished watchmaking era. One of the Brand’s icons, it still features the distinctive bezel and streamlined steel watchcase that have brought it such renown. Rather than a revival, the fifth generation of this legendary watch strikes the chord of an authentic renewal. Baume & Mercier is changing its direction – but not its philosophy – by continuing to express the Brand’s expertise in watchmaking design, style and innovation. Baume & Mercier is making a come-back, and Riviera is its flagship. 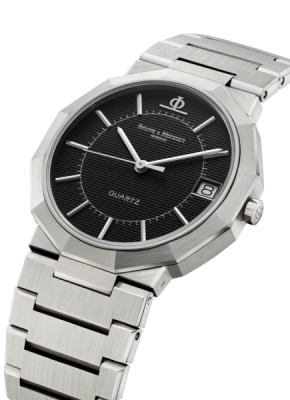 Some watches stand the test of time. The Riviera is one of those. When it was launched in 1973, Baume & Mercier chose to present a powerful, unique, different and distinctive watch. At a time when the watchmaking industry could afford to do almost anything, the Riviera broke with traditional codes. At the time, small gold watches were considered the height of luxury. But as has often been the case, Baume & Mercier was the first brand to sense that the wind was changing directions, that consumer behaviors were changing, and that fashion was moving forward. The Riviera rang in those changes. The culture of leisure, the spirit of independence, and the desire for modernity were becoming the defining forces of the time. From the moment it was launched, the Riviera embodied a form of freedom and renewal. A steel armor, a strong silhouette, and an offbeat elegance. It was ahead of its time. Known for its twelve-sided bezel reflecting the twelve hours displayed on its dial, this unique watch left an impression. The icon of a nonchalant generation, it has always carried the Baume & Mercier fundamentals in its genes: a love of design, a regard for form, and a desire for boldness.

With respect for Baume & Mercier expertise, the Riviera is making its come-back

Quartz movements, self-winding calibers, uniquely styled versions, oversized diameters, iron-pumping variations, and more conventional options... The Riviera has seen it all in its more than fifty years, and it still doesn’t look its age. Inspired by the carefree lifestyle of the French Riviera, this is the watch of casual elegance: a symbol of freedom and fun, taking an easygoing view of refined watchmaking. In 2021, the Riviera unveils a new generation. It captures the spirit of our times to better reinterpret it. In its own way: without pretense, without artifice. In complete sincerity.

The Riviera is making a comeback that strikes a balance between its roots in avant-garde ‘70s design and the sport-minded classicism of today’s watches. More than any other, the Riviera collection demonstrates the expertise of Baume & Mercier in the field of unusually shaped watches. Its uncompromisingly creative approach and recreational aspirations express the essence of the Brand’s style, then and now. The Riviera is back.

The distinctive style of Baume & Mercier. The Riviera, unlike any other!

Here it is in 2021, still authentic: a generously sized steel case, a dodecagonal bezel equipped with four screws, “Swiss Made" self-winding and quartz movements, and built-in interchangeable straps in steel or supple materials. The original design is still there, but so is the desire to adapt to our times.

It rounds a curve as it continues along, leaving its impression on the living legacy of a Brand on the move. It resembles its forbearers, but it rewrites their history. In its own way, as it always has. That’s the Riviera. It was brought forth in Saint-Tropez in the 1970s, and it has always conveyed the values of that cherished – sometimes idealized, always beloved – time. That’s the Riviera. The distinctive style of Baume & Mercier. It expresses the Brand’s essence and forthright simplicity. That’s the Riviera, not any other.

Three looks for the fifth-generation Riviera: a versatile watch

The Riviera returns to the stage in three size variations, each in steel: diameters of 36 mm, 42 mm and 43 mm. 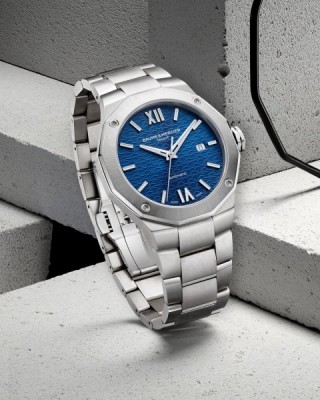 Loyal to the original, the “Swiss Made" self-winding Riviera in a 42 mm diameter revisits the fundamentals of the legendary model. It has a dodecagonal – twelve-sided – bezel, true it its form; a unique decoration (blue, black or silver) that symbolizes the convergence of the mountains and the ocean (water striking stone); and interchangeable straps in steel or blue rubber for a “full blue” version. The shape of the original 1973 watch is still present, but it has been updated to our times. 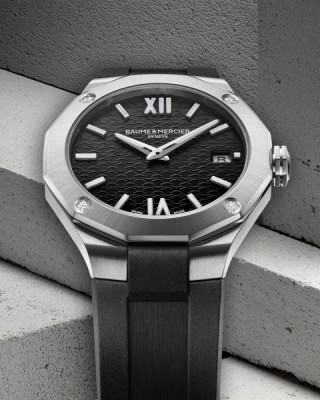 In a 36 mm diameter, the Riviera addresses active, independent women with assertive personalities. As feminine as can be, it is driven by a “Swiss Made" quartz movement; its steel version is adorned with an azure blue or silver dial, while its rubber strap version features a black dial. A self-winding version equipped with a tried-and-true “Swiss Made" movement is also available as part of this refined line; and like the entire women’s collection, it is water-resistant to 50 meters (the men’s timepieces are water-resistant to 100 meters). 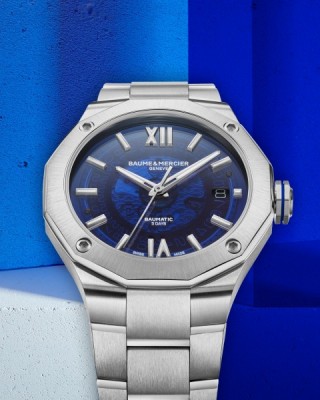 Last but not least, the Riviera also docks at the marina to showcase a luxury version equipped with the in-house BAUMATIC caliber, which has been known and acclaimed for several years, particularly through its success with the Clifton collection. The BAUMATIC movement also drives the ultimate interpretation of the Riviera by proposing –among other features – a five-day power reserve, a daily precision of -4 s / +6 s, and a magnetic resistance of 1500 Gauss, which provides solid protection against magnetic fields on an everyday basis. A technical jewel, the BAUMATIC Riviera clearly intends on addressing the expectations of future watch owners seeking excellence and irreproachable quality. 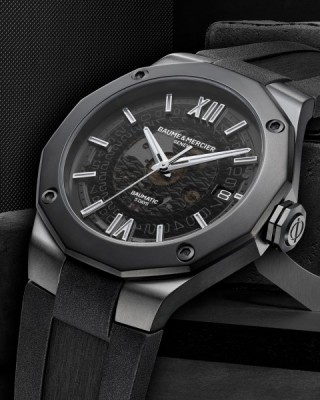 The BAUMATIC Riviera is available with a smoky blue decorated sapphire dial on a built-in steel strap, or with a smoky gray decorated sapphire dial on a supple black strap. The transparency of its opaque dials provides an opportunity to admire the moving gear trains of the BAUMATIC, as if time had no hold over this watch. Indeed, it has stood the test of time without batting an eyelid.

It is unique. It is reliable. It is athletic. It is authentic. It is “Swiss Made”. It is a Baume & Mercier. Its name is Riviera.

From bejeweled to bouncing, the Coussin watches cause a sensation