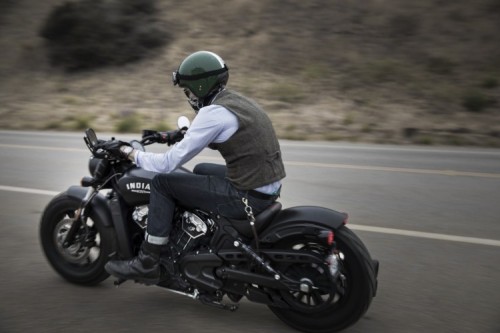 “Storytelling has been a big part of Indian since its founding in 1901. What Hendee and Hedstrom did in moving out of pedal bikes into motorised bikes is an incredible story. Today we continue to tell that story and ones about famous riders who have owned an Indian Motorcycle over the past 116 years. I truly believe our heritage and the tales of what motorcyclists achieved in the past is helping Indian gain momentum and a new following of riders who want to live and create stories for themselves.”

“Sharing special moments, living a variety of experiences, being animated by an enduring passion that makes us push our limits beyond the conventional is what enrich our lives. For Baume & Mercier, time is far more than a sequence of seconds, minutes and hours. It is punctuated by rare moments that count.These three exceptional Limited Edition timepieces, imbued with Indian’s spirit, translate this idea of freedom, adventure, tenacity and visionary thinking.”

The Spirit of Indian Motorcycle

BIRTH OF A LEGEND

Indian Motorcycle was born in 1901, a time where the only other way to get around was on horseback or bicycle. At its heart, Indian Motorcycle is a story of two founders, the entrepreneur George Hendee and the renowned engineer Oscar Hedstrom, working together to make the world a better and easier place to explore. Which is why Indian Motorcycle today encourages everyone who owns and rides one of its motorcycles to “live stories worth telling”.

George Hendee was already successful from selling bicycles and at the turn of the century, the bicycles he built to export were branded as “American Indian”, a name chosen to embody freedom and adventure and something spiritual, just like the Native American Indians. As Oscar’s reputation grew in the cycling community, he experimented mounting this engine to the frame of bicycles; creating the very first pacer bike. This caught the attention of George Hendee at cycling races and approached Hedstrom in the autumn of 1900, asking him if he would be interested in designing a motor-assisted bicycle, he could sell to the public.

So began the era of motor-cycles, mounting early-day gasoline engines on to existing bicycle frames. Racers who saw the speed of these contraptions then started to ask Hedstrom to build them a motorised bicycle to ride. On the 24th May 1901, a first prototype was ready to show to potential investors. Indian Motorcycle, America’s first motorcycle company had been set.

Right from the start, it was clear that Indian was going to race and set records. Both founders shared a love of competition from bicycle racing. Within two years by 1903, Indian was earning a reputation for reliability both on the street and in competition. But it was the V-twin engine introduced in 1907 that really pushed Indian ahead of the competition. Up until then the engines had just been a single cylinder, but having two cylinders, both working on the same crank meant they had more power and more speed.

By 1911, from boardtrack to flat track racing to wins at ultimate speed race road course the Isle of Man TT, Indian dominated in racing around the world, setting 121 recognised racing records. That same spirit to go faster, perform better and continually improve still exists at the Indian factory today.

Just as Indian was born out of the partnership of two visionary men, so was Baume & Mercier, with the brothers Louis-Victor and Célestin Baume opening up a watch dealership in Les Bois, a village in the Swiss Jura. By the 1900s, the company had an established international reputation, and its timepieces had set accuracy records and won a number of timekeeping competitions.

The Birth of Indian Legends

A DEVOTEE OF THE GOD OF SPEED

Spirit is something Indian has shown in all its efforts in motorcycling. Out of all of Indian’s achievements, it is the spirit and legend of Burt Munro that has become a part of the fabric of not just Indian’s culture, but of motorcycling culture in general. 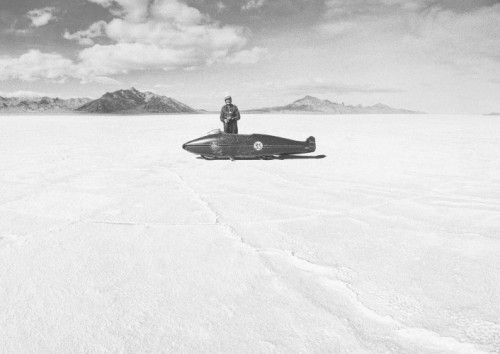 “You live more for five minutes going fast on a bike than other people do in all their life.”

Burt Munro was an amazing character who dedicated his life to motorcycling. His interest in speed began at an early age. While working in construction, he became an amateur speedway rider and continued to race motorcycles, rising to the top of the New Zealand racing scene. In 1920, he had the opportunity to buy an Indian Scout, but the bike was only capable of doing 55mph (88.5 km/h)… not enough for a devotee of speed like Burt. He began a project to make his motorcycle faster, spending the next 55 years modifying it in his shed.

His story has inspired many generations of motorcyclists, immortalized in the 2006 film called ‘The World’s Fastest Indian’, starring Anthony Hopkins. A story, which everyone can dream about. The red aerodynamic shell that encased his Scout, called a streamliner, has the black and yellow lucky racing number 35 on it, and this is now instantly recognisable as an icon of the can-do spirit that Burt demonstrated to make his dreams come true and make legendary moments.

Paying tribute to this 50th anniversary, Baume & Mercier has designed a one-of-a-kind watch. This official Indian Motorcycle chronograph can be proudly worn to remind the wearer that anything is possible with enough grit and determination and translates the enduring passion, a value conveyed by Baume & Mercier ever since. 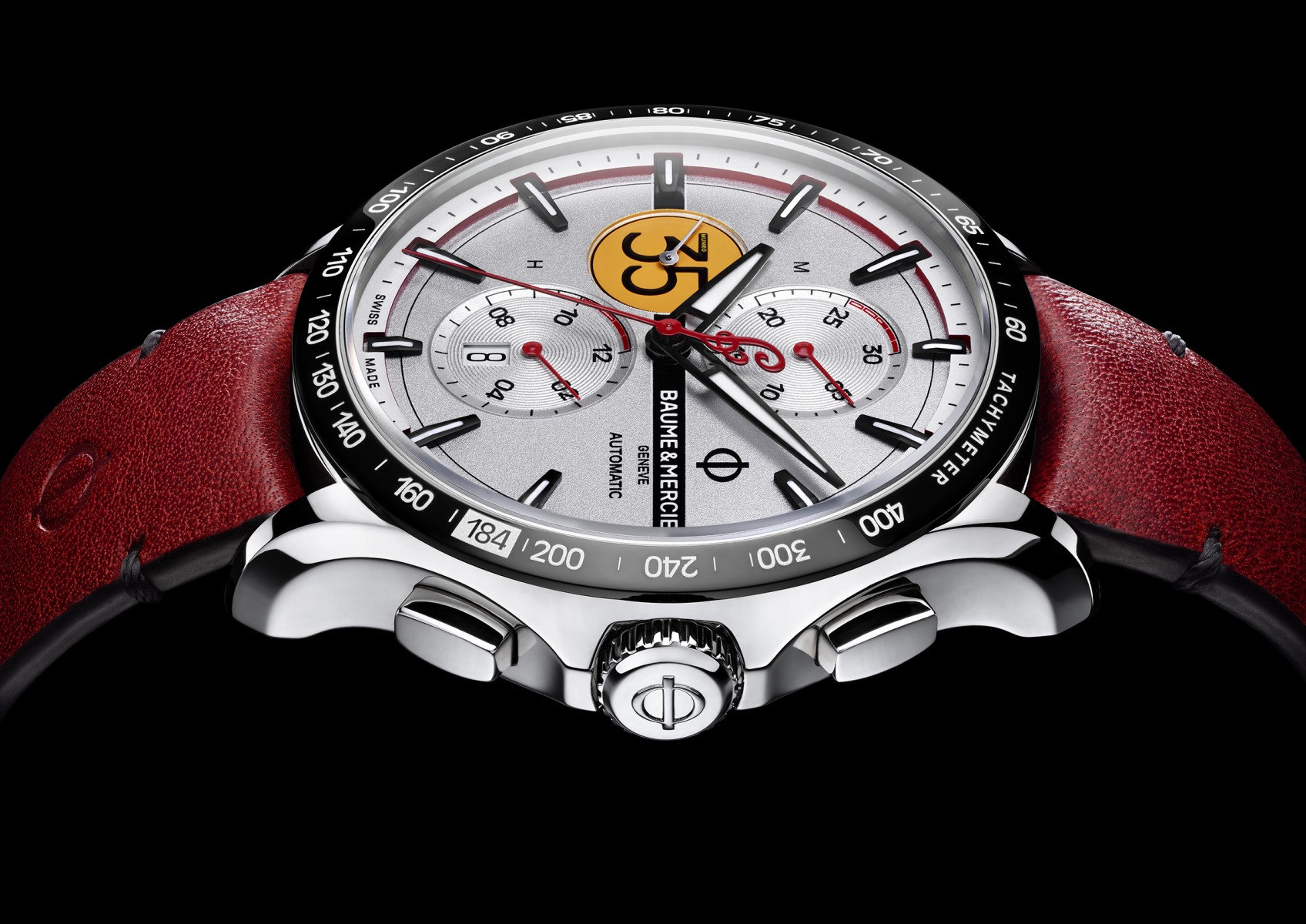 This limited self-winding chronograph edition features a number of special details designed to commemorate the extraordinary achievement of Burt Munro.

Immediately apparent is the Munro’s lucky number, 35, in the second counter at 9 o’clock highlighted by a horizontal black line, recalling one of the noticeable decor featured on the shell. The dial itself is silver-colored with sandblasted finishes, meant to mimic the surface of the Bonneville Salt Flats, where the record was set. The counterweight of the chronograph seconds hand is the immediately recognizable Indian “I.” The 44mm polished stainless steel case has a tachymeter scale on the bezel, with the speed record, 184 mph, highlighted on it. Next, the “Indian Red” color of the calfskin strap evokes the deep vermillion shade that is identified with the Indian Motorcycle Company, and the color of the Munro Special.

On the case back, housing the self-winding Valjoux 7750 caliber, the famous Indian Headdress logo of the Indian Motorcycle Company is engraved, as well as the number of the limited edition: “one out of 1967“.

From the start of the collaboration, Alexandre Peraldi, Baume & Mercier’s Design Director worked closely with Indian’s Industrial Design team based in Minnesota, USA. The pair’s aim was to capture the DNA of Indian in a refined and not obvious manner.

As such, Baume & Mercier is thrilled to offer two unique chronographs within the Clifton Club Indian collection. The two watches are called ‘Indian Legend’, with one inspired by the iconic light-weight Indian Scout model livery and the other, reflecting the design of the heavy-weight Chief model powered by the Indian’s ThunderStroke 111 V-twin engine. Each limited to 1,901 pieces representing the year 1901 when Indian was founded. 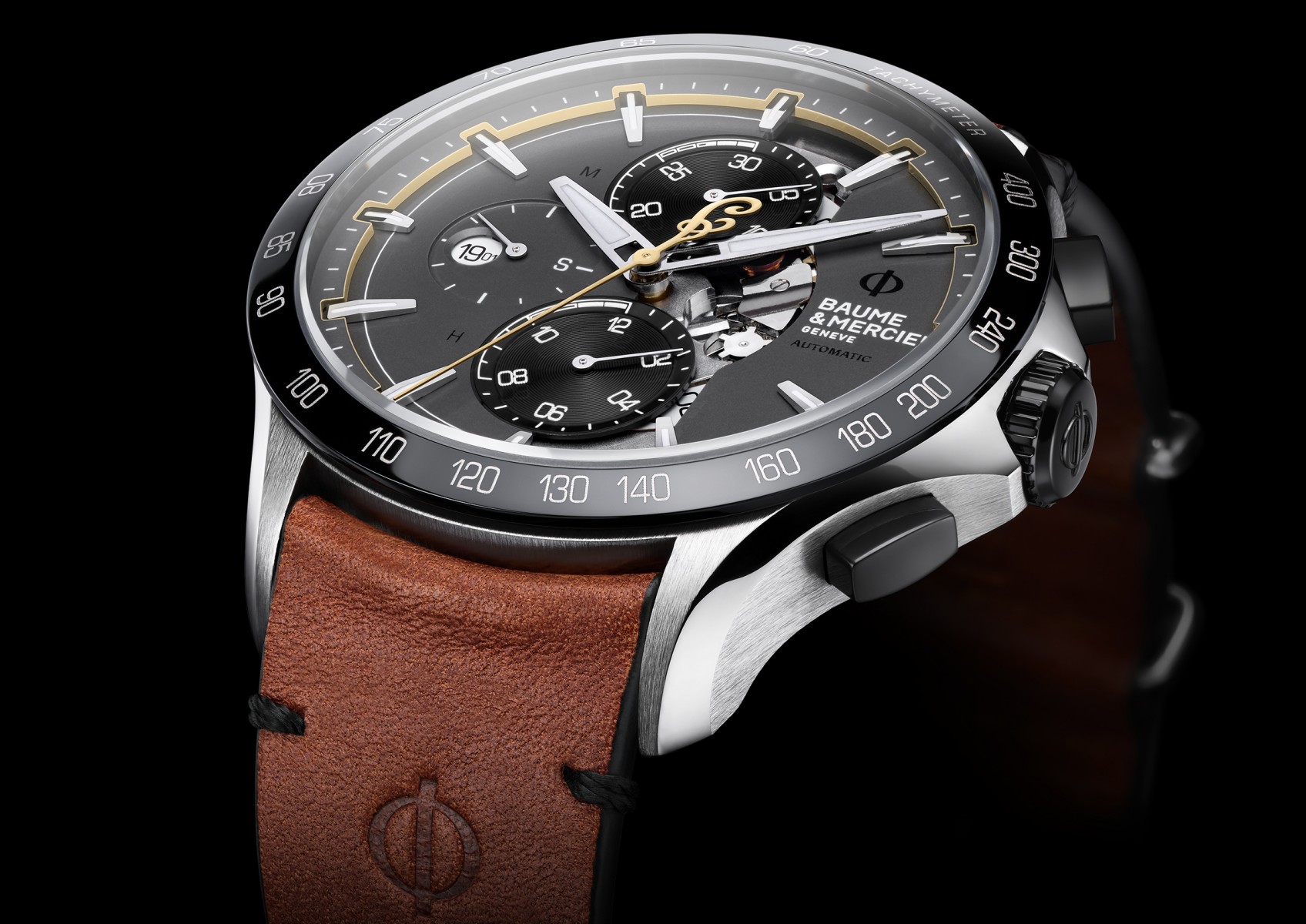 Housed within a 44mm polished & satin-finished stainless steel case with ADLC details and operating at a frequency of 28’800 vph, the Clifton Club Indian Legend Tribute, Scout Limited Edition is powered by the self-winding caliber (Valjoux 7750) offering a 48-hour power reserve.

The riveted indexes as well as hour, minute coated with green emission Superluminova are complemented by the tachymeter, date and chronograph functions, which the counterweight hand, is immediately recognizable with Indian “I.” The date disc displays “1901” at the 19th day of the month to recall Indian Motorcycle foundation’s date, which is engraved on the screw down case back, along with the Indian Motorcycle logo.

Also apparent are the chronograph counters designed to recall the speedometer. The open-worked opalin grey with black snailed counters is representing the livery shade of the Scout motorbike models.

The Clifton Club Indian Legend Tribute, Scout edition features a richly toned leather strap reflecting the brown color of the Scout’s seat and is made by the famous USA based Horween Leather Company renowned for crafting calfskin straps that develop character and patina over time. 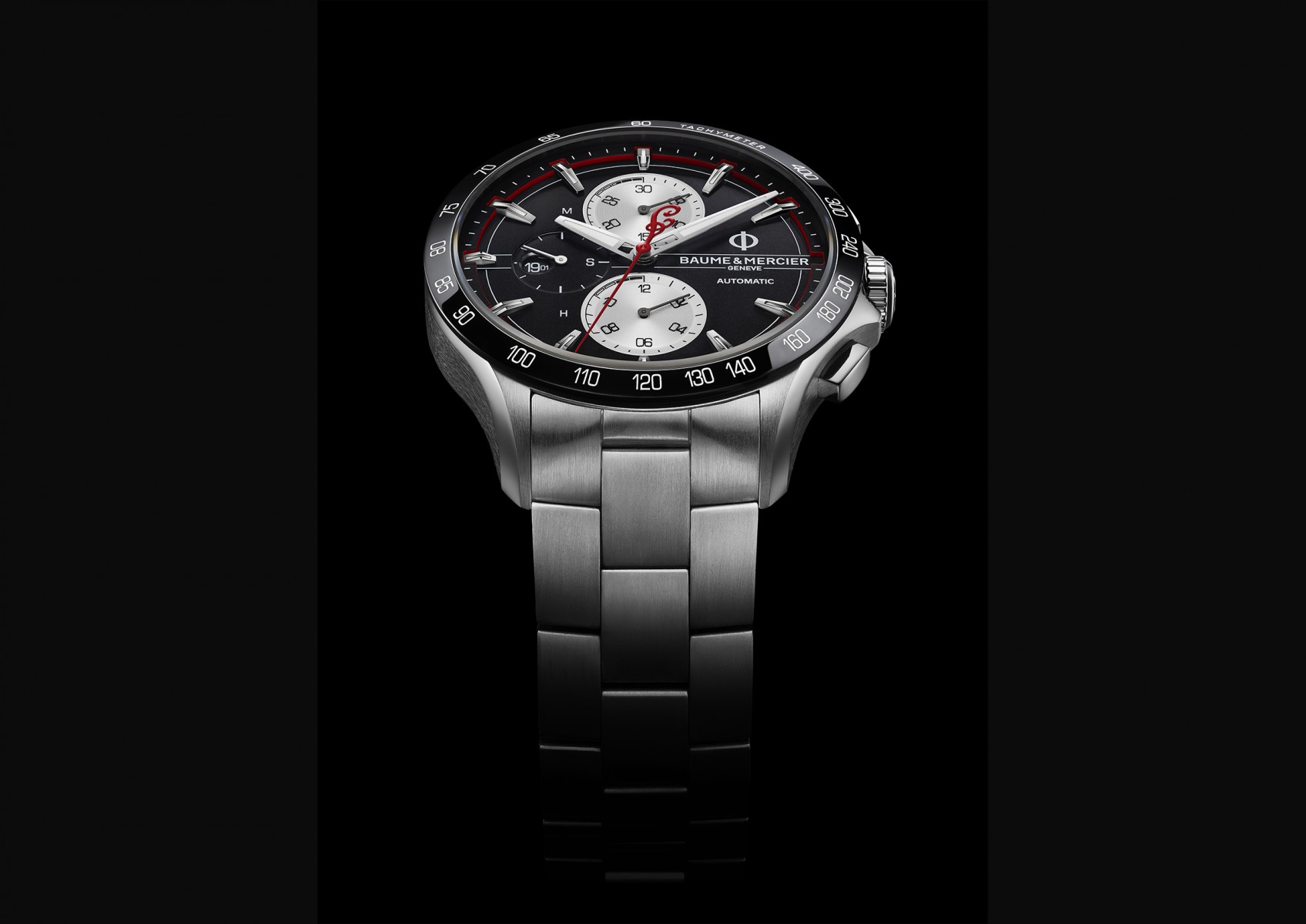 The riveted indexes along with the hour and minute hands coated with green emission Superluminova enhance the full black dial, surrounded by a tachymeter scale for speed measurements.

Looking more closely to the timepiece, a variety of signature elements from Indian’s design are displayed.

Immediately recognizable, the red chronograph second hand features the Indian “I”. The date disc with the “1901” mention recalls Indian Motorcycle foundation’s date, which is also engraved on the back of the case along with Indian Motorcycle Headdress logo.

Each of these unique timepieces transcend the iconic spirit of Indian Motorcycle, while featuring exceptional design and craftsmanship and will be presented within a special box at the colours of Indian.